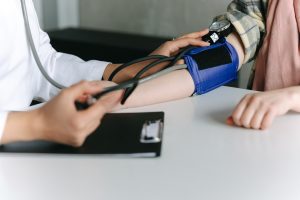 The researchers used data from the Framingham Heart Study (FHS), an ongoing, community-based study that began in     1948. Its Offspring Cohort tracks the health outcomes of 5,124 of the original participants’ children from health                 examinations every 4 years.

Altogether, the researchers used data from 2,986 people who attended their fifth examination between 1991 and 1995, were at least 45 years old during the period, and whose health records contained data on vascular risk factors.

The researchers also screened for:

The researchers also used brain imaging and electroencephalography (EEG), cardiac and other relevant data to ascertain cases of epilepsy.

Among the cohort, the research identified 55 examples of epilepsy, of which 26 were definite, 15 probable, and 14 suspected. Individuals were an average of 73.8 years old at the time of potential diagnosis.

The researchers found that hypertension had links to an almost 2-fold higher risk of epilepsy. However, the other risk factors had no links to epilepsy.

After excluding people taking antihypertensive medications, the researchers noted that high blood pressure had links to a 2.44-fold high risk of developing epilepsy.

They also found that every 10 mm Hg change in systolic blood pressure was associated with a 17% higher risk of developing epilepsy.

Several theories may explain the link between epilepsy and hypertension. One mechanism may be via the renin-angiotensin system (RAS)Trusted Source, which regulates blood pressure.

ResearchTrusted Source suggests that after repetitive seizures, rats have 2.6–8.2 times the components of RAS than mice without seizures. Antihypertensive drugs that lowered levels of RAS components delayed seizure onset and reduced seizure frequency.

However, more research is needed to understand how much this mechanism explains the link between epilepsy and hypertension, as other research suggests the system may have a limited effect.

According to the researchers, another possible underlying mechanism is small vessel disease (SVD)Trusted Source, a condition in which the walls of small arteries and capillaries are damaged and thus do not deliver sufficient oxygen-rich blood to various organs. In a recent study, scientists foundTrusted Source that the duration of high blood pressure is a strong predictor of SVD in later life.

The researchers add that SVD has links to temporal lobe epilepsy. Possible mechanisms include cortical microinfarcts, small lesions in cortical tissue, and the disruption of U fibersTrusted Source that may lead to excessive excitability and thus seizures. U fibers connect neighboring areas of the cerebral cortex.

Anti-Inflammatory Diet: What You Eat Could Maintain Cognitive...

These Lifestyle Habits May Increase Your Chances of...

A brain implant may be able to alleviate...

A new study reveals that the ‘feel good’...